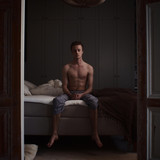 The captivating and mature sound of Sweden native Isak Danielson shows an old soul in a young man’s body and a talent reaching beyond his years. His voice has drawn parallels to both Anthony & The Johnsons and Hozier, but it stands out perfectly by itself as a new, measure on it's own. His debut album “Yours” follows Danielson’s breakthrough with track ’Ending’ being featured in Marvel’s Cloak & Dagger which has pushed his Spotify stream count to over 250 million.   The success of ’Ending’ came after somewhat of an organic discovery. The choreographer Talia Favia, who had found Isak’s song and and was so inspired that she corepgraphed a routine that made it to last year's season of the American TV show "So You Think You Can Dance", where two of the participants did an emotional performance.   The track got another push when it was heard in the emotional, five minute closing scene in episode 8 of Marvel’s Cloak And Dagger July 19, 2018. This gave him a lot of attention all around the world, and made him the 84 most Shazam’ed artist in the US during that week. It also gave him a top 10 chart position on Billboard's ''Hollywood Reporter Top TV Songs Chart in July''.   On October 19, 2018 his album Yours was released and went straight to iTunes Sweden's first place. He participated in TV4's Morning show and sang the songs ''I'll Be Waiting'' and ''Ending''. He also performed at the Rockwood Music Hall in New York. Once you’ve heard his voice, you don’t forget it.