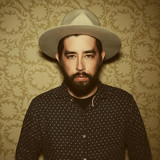 Jackie Greene has been chasing a sense of authentic human connection through art ever since his teenage years, when he began self-recording and releasing his own music in central California. After a critically acclaimed independent debut, he signed his first record deal and embarked on a lifetime of recording and touring that would see him supporting the likes of BB King, Mark Knopfler, Susan Tedeschi, and Taj Mahal, in addition to gracing festival stages from Bonnaroo to Outside Lands. The New York Times hailed his "spiritual balladry," Bob Weir anointed him the "cowboy poet" of Americana and blues, and the San Francisco Chronicle raved that he has "a natural and intuitive connection with… just about any musical instrument."