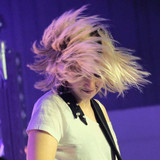 Chorusgirl make noisepop, blending the sounds of Lush, the Cure, The Breeders, the Bangles, surf, girl groups, melodies, dirt, jangle and noise into a swirling & shimmering mix that spins your head until you’re dizzy. The lyrics are personal, delicate and angry, about losing and giving up, but all of that heartache and anger is layered underneath enough noisy rubble and happy fizz. The band is the brainchild of London-based German-born songwriter Silvi Wersing, and the name refers to the fact that Silvi spent years playing ‘chorus girl’ to other musicians’ dreams, until deciding that introverts and chorus girls could and should front their own shows. Fortuna Pop released Chorusgirl’s eponymously titled debut album in 2015 to great critical success, and the first single ‘Oh, To Be A Defector’ was playlisted by BBC Radio6. In 2018, they were signed by British indie label Reckless Yes, who released their second album ‘Shimmer and Spin’ to rave reviews (8/10 Loud and Quiet, 5/5 Narc Maga, 7/10 Allmusic). Clash Magazine premiered the first single ‘No Goodbye’; and the second single 'In Dreams' garnered support from Steve Lamacq, including it in his playlist for BBC6 Music. A changing line-up of friends forms around Silvi to bring her songwriting to the stage. The band have played shows and festivals in the UK, US, Norway, Spain, Germany, France, Sweden, supporting the likes of the Primitives, Allo Darlin, the Clientele, Joanna Gruesome, Flowers, Spinning Coin, and