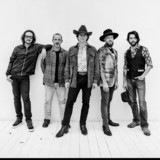 Lukas Nelson and Promise of the Real

Featuring Lukas Nelson and Promise of the Real

Lukas Nelson knows all about legacies, indeed he's been hard at work carving his own for most of his young, eventful life. Balancing his work as front man of Lukas Nelson & Promise of the Real with their steady gig as Neil Young's studio and touring band — and of course, the never-ending road alongside his father in Willie Nelson & Family — Lukas has sharpened the edges of his singular sound, one that nods to his influences while pushing forward into uncharted territory. In the past year alone, the group — bassist Corey McCormick, drummer Anthony LoGerfo, percussionist Tato Melgar, multi-instrumentalist Logan Metz and guitarist, vocalist Nelson collaborated with Lady Gaga and Bradley Cooper on the blockbuster film and soundtrack, A Star Is Born turned and turned in star-making performances at festivals like Stagecoach, Newport Folk Festival, FarmAid, New Orleans Jazz Fest and the UK’s legendary Glastonbury Festival.