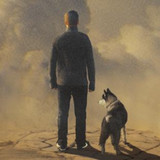 Behind the music project and pseudonym ”Between Interval” is Stefan Strand, electronica composer and producer based in the Scania/Öresund region of Sweden. Born in 1982 with a childhood imprinted by 8-bit video game music and cheesy euro dance, his father's Pink Floyd LP records from the 70's gave an early introduction to ambient soundscapes, suggesting that music could be more profound than just a catchy melody. Stefan started composing music late 1996, at that time heavily influenced by techno, psy trance & house genres. A few years later he found his way to the vast ambient sound worlds inspired by artists like Steve Roach, Robert Rich, Aphex Twin and Kenji Kawai. The first Between Interval album – Radio Silence, a soundtrack to an imaginary dystopian world – was finished in 2004 and released on black CDR. The second album, Secret Observatory, consisting of four long seamless space music tracks, was his first official release picked up by US label Spotted Peccary in 2005. It was followed by Autumn Continent in 2006, inspired by the calm somberness of the dark months of the year. In 2007 Radio Silence was remastered and re-released on Spotted Peccary, followed up two years later by The Edge of a Fairytale, an atmospheric world of sounds inspired by mythological creatures and places. In 2017, following some years of musical hiatus, LEGACY was released - a deep sci-fi journey with elements of electronica, dub techno, space music and Berlin school.