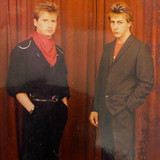 James Daly AKA stage name Jamie Delourde and Clinton Haynes met in 1974 and were in a successful covers and originals band. Delourde (15) performed his own tracks like ‘Time' a song about an 11 year old boy who didn't have a normal childhood and had to protect his mother and little brother. His only solace was the local park where he played freely. After years of touring in their band 'Purple Flame', Clinton and Jamie took a break to focus on writing new original material. Haynes’ cynical view of the world was full of hate and greed. Jamie’s polar opposite viewpoint was based on the ideology that the world should be full of hope. The boys then formed in 1982, ‘Dot Dot Dash’ where they quickly built a large following and headlined at venues like The Mean Fiddler, The Fulham Palace Greyhound, The Clarendon, The Rock Gardens, The Marque and Le Palais in London. The band was known for frontman Delourde’s flamboyant dress sense with his religious safety pins and glass crosses. Jamie was eventually offered deals with EMI

and Virgin. The deals didn't include the band and Haynes parted company due to personal reasons. Jamie walked away from the deals and eventually in 1987, the band spilt. Delourde would reappear as James Daly film producer / writer /director of GMI and Clever Films now two of the most well respected film and media companies in Europe. For more info on James Daly please check out his two websites -