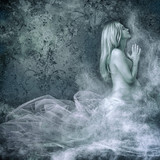 " Athena’s voice is heart-warming and majestic.

" Huffington Post, USA “Just listen to the voice – a fluty, soaring, intimate thing, pure as a Cycladian sky, but with an edge which gives it real emotional eloquence.” BBC Music, UK “A star...“ Billboard, USA "Radiating class and oodles of talent... a voice blessed… this rare diamond ought to shine." Daily Mail , UK "Shines with authentic light" American Songwriter, USA London born artist Athena Andreadis releases her new album Outside of Time. A Leonard Cohen collaborator (she sang on You Want it Darker), Athena now joins producer Ethan Allen  (Daniel Lanois, Patty Griffin) and songwriter Billy Steinberg (Linda Ronstadt, The Pretenders) for her single “Out of the Dirt”. When the BBC recognised her voice as that of "real emotional eloquence” and the US Billboard Magazine called her “a talented rising star” it’s easy to see why fans around the world have been creating hype about this British-Greek Londoner’s unique singer-songwriter's powerful voice. With several records and awards under her belt including Best Folk /Singer Songwriter Album at the Independent Music Awards (US), she has written songs for charities like Save the Children in the UK and events like Visit England campaign during the London Olympics, and for film/TV shows like Fuller House (Netflix). Athena has performed worldwide including Glastonbury Festival, the Royal Festival Hall, Troubadour, SXSW.