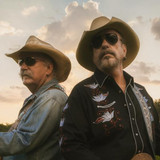 The Bellamy Brothers have had 20 #1 hits sold 40 million albums and now have a new album Over the Moon. The famous Country Music Duo also have a Reality Show Honky Tonk Ranch based on their misadventures from ranching to recording, from touring the world to owning their own record company and trying to guide the next generation of Bellamys Jesse and Noah .... watch as they try to control the chaos of world touring from their old family Ranch in central Florida. https://www.rfdcc.com/music-and-entertainment/honky-tonk-ranch