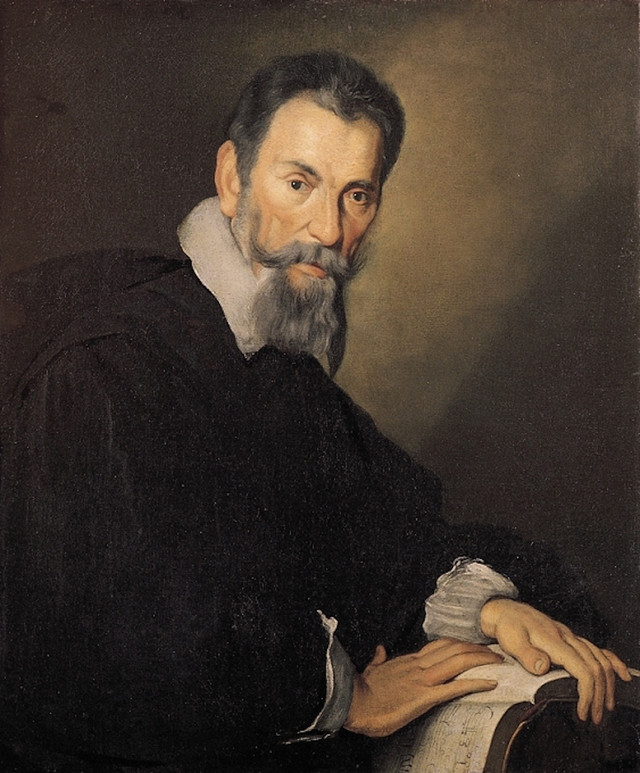 If one were to name the composer that stitches the seam between the Renaissance and the Baroque, it would likely be Claudio Monteverdi -- the same composer who is largely and frequently credited with making the cut in the first place. The path from his earliest canzonettas and madrigals to his latest operatic work exemplifies the shifts in musical thinking that took place in the last decades of the 16th century and the first few of the 17th. Monteverdi was born in Cremona, Italy, on the May 15, 1567. As a youth his musical talent was already evident: his first publication was issued by a prominent Venetian publishing house when he was 15, and by the time he was 20 a variety of his works had gone to print. His first book of five-voice madrigals, while bearing a dedication to his Cremonese mentor Ingegnieri, succeeded in establishing his reputation outside of his provincial hometown, and helped him find work in the court of the Duke Gonzaga of Mantua. His compositions from the Mantuan period betray the influence of Giaches de Wert, who Monteverdi eventually succeeded as the maestro di cappella. It was around this time that Monteverdi's name became widely known, due largely to the criticism levied at him by G.M. Artusi in his famous 1600 treatise "on the imperfection of modern music." Artusi found Monteverdi's contrapuntal unorthodoxies unacceptable and cited several excerpts from his madrigals as examples of modern musical decadence. In the response that appeared in the preface to Monteverdi's fifth book of madrigals, the composer coined a pair of terms inextricably tied to the diversity of musical taste that came to characterize the times. He referred to the older style of composition, in which the traditional rules of counterpoint superseded expressive considerations, as the prima prattica. The seconda prattica, as characterized by such works as Crudi Amarilli, sought to put music in the servitude of the text by whatever means necessary-including "incorrect" counterpoint-to vividly express the text. In 1607, Monteverdi's first opera (and the oldest to grace modern stages with any frequency) L'Orfeo, was performed in Mantua. This was followed in 1608 by L'Arianna, which, despite its popularity at the time, no longer survives except in libretti, and in the title character's famous lament, a polyphonic arrangement of which appeared in his sixth book of madrigals (1614). Disagreements with the Gonzaga court led him to seek work elsewhere, and finally in 1612 he was appointed maestro di cappella at St. Mark's Cathedral in Venice. His earliest years at Venice were a rebuilding period for the cappella, and it was some time before Monteverdi was free to accept commissions outside his duties at the cathedral. In 1616 he composed the ballet Tirsi i Clori for Ferdinand of Mantua, the more-favored brother of his deceased and disliked ex-employer. The following years saw some abandoned operatic ventures, the now-lost opera La finta pazza Licori, and the dramatic dialogue Combattimento di Tancredi e Clorinda. The 1630s were lean musical years for Monteverdi. Political battles and an outbreak of the plague left him without commissions from either Mantua or Venice. However, with the opening of Venetian opera houses in 1637, Monteverdi's operatic career was revived. A new production of L'Arianna was staged in 1640, and three new operas appeared within two years: Il ritorno d'Ulisse in patria, Le nozze d'Enea con Lavinia (also now lost), and L'incoronazione di Poppea. This resurgence preceded his death by just a few years: he passed away in Venice in 1643.