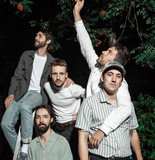 Foreign Diplomats embody the idea of a carefree and slightly disobedient youth: the ones to blow up firecrackers in dark alleys at night, but not to throw punches. Put another way, Foreign Diplomats is also the journey of five guys (not the burger chain) who accidentally found their stage name at the airport while waiting at customs.

With a self-titled debut EP (2013) and two records — Princess Flash (2015) and Monami (2019) —, Foreign Diplomats were soon recognized for their ability to kick off the party, supporting several prominent bands like Violent Femmes, Phantogram, Vance Joy and Half Moon Run as part of renowned festivals such as Reeperbahn (Germany), Paléo (Switzerland), Les Primeurs (France), Cervantino (Mexico), Osheaga, Festival international de jazz de Montréal and Festival d’été de Québec (Canada). According to the boys, the more the merrier and it sounds just right: if someone cracks a match, they will turn it into a bonfire.