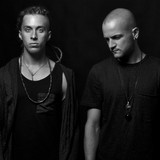 Indiana's I-Exist is a forward thinking - electronic rock duo with a progressive catalog spanning over 10 years.

Currently embracing the Post-EDM movement through live instrumentation, their sound is a combination of powerful, rock-infused melodic bass, with an atmospheric, new-age bent. Formed in Indianapolis in 2007, I-Exist largely center on the songs of lead singer and multi-instrumentalist, Brian Lenington. Originally a four-piece, I-Exist released their debut full-length album, Within Imagination, in 2009. The following year, the group's song "Fire Fly" showed up on the soundtrack to the horror film Saw 3D, which helped springboard the band to the national level. After touring for much of 2011, the group returned with the ambitious four-volume concept album project Humanity. The 24-track collection showcased the outfit's creative growth and found them incorporating more varied sonic textures into their songs, including orchestral arrangements. In 2014, I-Exist pared down from a four-piece to a duo featuring Lenington and percussionist / multi-instrumentalist Cameron Bailey. As a duo, they toured across the United States with a multimedia concert experience featuring holographic stage performers. On the heels of this tour, in 2015, I-Exist revealed their plans for another highly ambitious concept album project.