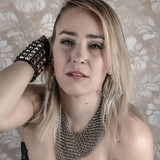 Christy Johnson is an up-and-coming triple threat in the film, stage, and music industries.

Most notably, she has been the vocalist of the nationally touring melodic hard rock band, Dreamkiller, since 2004. Through that endeavor she toured the U.S. and Canada and has been recognized with numerous awards, including Los Angeles Music Awards National Female Vocal Performer and International Music & Entertainment Awards Rock Female Vocalist.