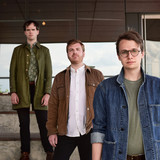 Morningsiders are a NYC folk-pop act known for their unique indie music that bridges the gap between virtuosic, intimate live moments and gorgeously atmospheric studio-produced pop song prowess. Having met and formed at Columbia University, the three co-founders - Magnus Ferguson, vocals/guitar; Reid Jenkins, fiddle/vocals; and Robert Frech, piano - have evolved from an Americana collective comprised of rotating members and improvisatory performances into today’s guitar-fiddle-piano trio more focused on song craft and production. First making a name for themselves on a national level when their song “Empress” topped Spotify’s Viral 50 in 2015 and was featured in a Starbucks commercial featuring Oprah Winfrey, the band released a song each month throughout 2018 and 2019 (releasing the lot as their debut LP, A Little Lift) then branched out from their acoustic roots for the folk-rock driven sophomore album, Pollen, in 2020. And now, with the release of the new Easy Does It EP produced by the celebrated maestro Peter Katis, the trio are set to expand their reach while still retaining the moments of brilliant musicianship and quirky sonic maneuvering that first earned them notice. The record was mostly written by Ferguson and arranged in turn by Jenkins with contributions from Frech.