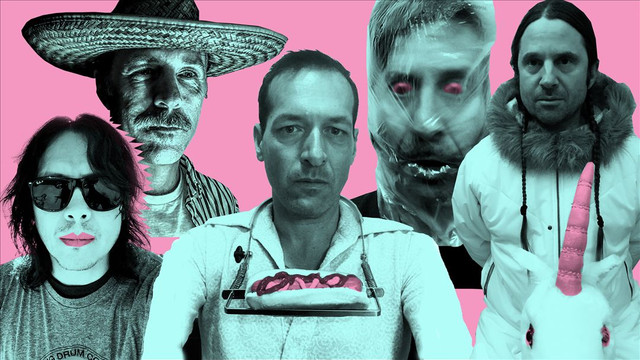 Revolving around the talents of childhood friends, frequent bandmates, and rock & roll believers John "Speedo" Reis and Rick Froberg, Hot Snakes formed in the late '90s and released a string of no-frills, high-energy albums in the early 2000s, then re-formed without a hitch in 2018. Reis and Froberg first played together in the post-hardcore band Pitchfork in the late '80s, then changed direction to form Drive Like Jehu in 1990. At the same time Reis formed Rocket from the Crypt. While they had different sounds -- Drive Like Jehu more abrasive, RFTC more anthemic and fun -- the two bands followed a similar path commercially. They both released albums in 1991, then in 1992 signed to Interscope Records. Drive Like Jehu released Yank Crime in 1994, then folded, after which Froberg moved to N.Y.C. to work as an illustrator. Reis continued playing and recording with RFTC until 1999, when the band left Interscope and decided to take a break. He started up Hot Snakes with ex-Delta 72 drummer Jason Kourkounis and began working on a batch of songs in San Diego. The duo then called in Froberg to provide vocals once the recording got serious. The resulting album, 2000's Automatic Midnight, was the first release on Reis' Swami Records. With the help of bassist Gar Wood, the bandmembers went on a short tour before heading back to their respective cities (Reis to San Diego, Froberg to N.Y.C., Kourkounis to Philadelphia). Reis also used his brief downtime from RFTC to start another band, Sultans. Hot Snakes soon got back together to record another album, this time with Wood on board in the studio. Tracked at Reis' home studio, 2002's Suicide Invoice saw the band branching out a bit from the primal garage punk sound of its debut. The band headed out on tour after the record's release. When they returned, Kourkounis left the band and joined Burning Brides. He was replaced by Mario Rubalcaba, who was also playing in RFTC, and Hot Snakes went back to the studio to cut their third album for Swami. Reis' studio had burned down not long before, so the foursome headed to Big Fish Studio to work again with recording engineer Ben Moore. Audit in Progress was released in late 2004 and the band decamped to Europe for a tour soon after. While in England, they had the honor of recording one of the last Peel Sessions before John Peel's passing. The session was issued by Swami in 2005. The band also toured Australia that year, recording a Triple J Radio radio session in May that was released by Swami in 2006. By that time, the bandmembers had decided to take a break from playing together. Reis concentrated on Sultans and running Swami, while Froberg returned to his day job. By 2008, Sultans were done, Reis had a new band (with Wood on guitar and Kourkounis on drums) called the Night Marchers, and Froberg had formed a new combo called the Obits. When the two bands shared the bill at a 2010 show in San Diego, they revisited the glory days of Hot Snakes by getting together to play a handful of songs, This spurred short reunion tours in 2011 and 2012, with both Kourkounis and Rubalcaba helming the drums. After those gigs, the band went dark again until the two longtime friends decided in 2017 that the time was right to get back into the studio. With a lineup that included Wood on bass and the dual-drum attack of Kourkounis and Rubalcaba, the band spent a year recording in San Diego and Philadelphia, with longtime collaborator Ben Moore recording and mixing the songs. They signed with Sub Pop Records and the label reissued their first three albums early in 2018 as a taster for the upcoming record. The stripped-down and powerful Jericho Sirens was released in March of 2018. ~ Tim Sendra, Rovi