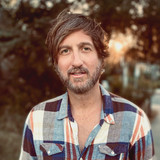 Mike Stocksdale’s ability to translate his personal experiences into relatable lyrics is, in a word, captivating. The Los Angeles based artist started writing tunes at the age of fifteen, when he first learned a few chords on the guitar, and he hasn’t stopped since. Stocksdale began recording and releasing music as lead guitarist and songwriter for the popular Midwest band, Three Minute Mile, and later became a solo artist as he found his voice. His latest release, If You Ask Me I’ll Tell You, is a soulful folk masterpiece that was recorded, performed, and produced by Stocksdale in his humble home studio in Culver City, CA.