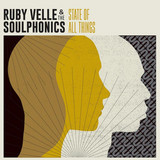 Deep, raw funk. Stax-style Southern soul. Uplifting Motown-channeling anthems. Atlanta’s Ruby Velle &amp; The Soulphonics are the heirs to the thrones of the old-school masters. Powerhouse singer Velle and her band brings classic sounds glimmering into the now with a fresh new modern sheen. It’s this inviting and accessible bravado that has scored the band critical acclaim from outlets such as The New York Daily News, MTV, Paste and more. And in addition to their critical success, at a time when record sales are at an all-time industry low, the independent, DIY-minded Velle &amp; The Soulphonics sold a quarter-million downloads of their single “My Dear” on iTunes, landing them in the top 30 on Billboard’s Heatseeker charts and at a stunning #4 on the iTunes R&amp;B charts when their debut album It’s About Time was released in 2012. The group has shared bills with megastars and indie press darlings alike, including Erykah Badu, The XX, Goodie Mob, Gary Clark Jr., Animal Collective, Feist and Kendrick Lamar. And they continue to blaze a trail into the hearts of music fans with their first single from their sophomore album, “Broken Woman,” released in the Fall of 2017 and immediately appeared on Spotify's Official "Still Got the Blues" playlist. They followed that up with "Call Out My Name" and the title track “State of All Things” -which premiered in March 2018 on PASTE Magazine. Their LP “State of All Things,” is arriving in stores globally on 4/27/2018.