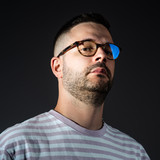 Jacopo Majerna, aka Sick Budd, was born in Milan (Italy) in 1992. After his high school diploma, he graduated in Music Informatics in 2015 and right after attended DJ Skizo’s classes at the Accademia del suono of Milan. In 2016 he published three indipendent albums imbued with a classical mood which represent his own tribute to the history of the genre. 2016 was also marked by his entrance in Bullz Records, an indipendent rap label based in Milan (Italy) in which Sick Budd has been working since as a artistic director, audio engineer and producer mainly focused on the italian urban scene. His most recent works focused on his collaboration with the labelmate Silent Bob. The duo is dropping "Piano B", first official album, on January 2020.