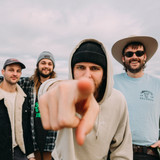 After snapping heads with their 2017 self-titled EP, (spawning tours with the likes of Tired Lion, Balance And Composure, Hockey Dad and Trophy Eyes, and festival slots on Groovin' The Moo, UNIFY, Festival Of The Sun and Party In The Paddock), Dear Seattle asserted themselves as one of Australia's most exciting young rock acts with the release of their 2019 debut full-length Don't Let Go.

Exploring the stress and challenge of being a full-time musician, anxiety (‘Bigger Than My Brain’), self-doubt (‘Daytime TV’), reckless living (‘Homegrown’), the fake nature of the music industry (‘Try’) and perhaps most searingly, the death of vocalist/guitarist/lyricist Brae's father (‘I Keep Dreaming’), Don't Let Go packed in poetic lyricism and plainspoken Australian storytelling, offering a depth and dimension not too often found in their genre. They captured industry and audience hearts alike upon the album's release in February 2019 with Don't Let Go garnering praise from the likes of Pilerats ("stellar"), The Music, ("hard not to fall in love with"), New Noise ("an immaculate effort") playing triple j's lauded Like A Version segment, copping a nomination for Best Rock/Punk Album at the 2020 AIR Awards and spawning a huge headline Australian tour to celebrate. Now with a few years and some more life behind them, plus a renewed focus to write completely for themselves, Dear Seattle return with 'In My Head' before looking to release more new music soon.