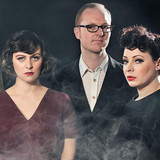 Pairing bright and clever retro-styled melodies with smart, witty lyrics and a sense of style that is sleek but lived-in at the same time, Camera Obscura are a Scottish indie pop group who became one of the most celebrated acts on the U.K.'s twee pop scene, while also displaying a pronounced country influence in their more low-key numbers. Hailing from Glasgow, Camera Obscura were formed in 1996 by lead vocalist and guitarist Tracyanne Campbell, percussionist John Henderson, and bassist Gavin Dunbar. After playing out with a handful of guest musicians, Camera Obscura expanded to a quartet with the addition of guitarist David Skirving, and in 1998, the group issued their first single, "Park & Ride" on the indie Andmoresound label. In 2000, Lee Thompson joined Camera Obscura as their full-time trap drummer, and Lindsay Boyd signed on as keyboard player. In 2001, Skirving left the band, and Kenny McKeeve became their new guitarist. As they became better known, they were frequently compared to Belle and Sebastian, and B&S leader Stuart Murdoch was recruited to produce their debut album, 2001's Biggest Bluest Hi-Fi. The album earned praise from influential BBC disc jockey John Peel, who invited the group to record a live session for broadcast on his show, and the single "Eighties Fan" became a modest hit. In 2002, Lindsay Boyd parted ways with Camera Obscura and Carey Lander took her place behind the keyboards, while Nigel Baillie also joined the band, handling trumpet and percussion. 2003 saw the release of the band's second album, Underachievers Please Try Harder, followed by an international tour covering Great Britain, Ireland, and the United States; in the wake of the tour, John Henderson left the group. In 2004, Camera Obscura recorded another session with John Peel, one that saw the band debuting special new material, as Peel had invited them to set several poems by Robert Burns to music. The group's third studio album, Let's Get Out of This Country, was released in June 2006, and features one of the band's most popular tunes, an answer song to Lloyd Cole's "Are You Ready to Be Heartbroken" titled "Lloyd, I'm Ready to Be Heartbroken," which was featured in the film P.S. I Love You and the TV series Friday Night Lights. In 2009, Camera Obscura were signed by the celebrated U.K. label 4AD, and they released their first album for it, My Maudlin Career, in April of that year. The success of the single "French Navy" helped push the album into the Top 50 of the U.K. album charts, and the Top 100 of the American album surveys. (The song also became the theme of the U.K. cooking show Come Dine with Me). The year saw another lineup change for Camera Obscura, as Nigel Baillie left the band to spend more time with his new family. In 2013, the band released their second album for 4AD, Desire Lines, which was produced by Tucker Martine, best known for his work with the Decemberists and My Morning Jacket. The album achieved commercial success similar to that of My Maudlin Career, but it also preceded the end of an era for the group. In 2015, Camera Obscura canceled a tour of the United States when it was learned Carey Lander had been diagnosed with osteosarcoma, a form of bone cancer. Lander's bandmates rallied around her, helping support an online campaign to raise both funds for treatment and awareness of the disease, but on October 11, 2015, cancer claimed Lander's life. After her passing, Tracyanne Campbell posted a message on social media, declaring, "(Lander) didn't leave the band. She left her body. She's still in the band. Right!" ~ Mark Deming