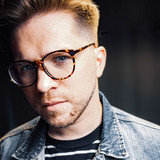 Whether through solo work or as the frontman of The City Harmonic, Juno Award-winning worship leader and writer Elias Dummer has come to be known for his thoughtful prose, dynamic musicality, and spirited presence. The measurable impact of this combination is almost dizzying, with more than 60 million streams and dozens of awards and global chart appearances to his name. He's appeared on many of Christian music’s biggest stages and has been published or featured on multiple internationally recognized platforms including NBC, CBC, Relevant Magazine, and The Huffington Post. But if you ask him, none of that matters. Spend even a few moments with him and you’d find yourself immersed in stories of God at work, peppered with nerdy trivia, and filled with hope at his refreshing hunger for a different sort of conversation around faith. It quickly becomes clear that, had there never been success to speak of, he would be no less passionate about this one thing: to know and follow Jesus more in every facet of life and to help others to do the same. Today, Elias lives with his wife and their five kids in Nashville, where he serves as the Director of Worship at The Village Church, which he helped to plant in 2015. Just as ministry first fueled the music of The City Harmonic, he continues to write, release new music, and teach on his Youtube channel and forthcoming Podcast, seeking out new ways to reach the world with the incredible love of Jesus through song and substance alike.