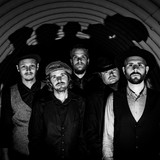 New single ”Golden Globe” out 17.07.20  Prologue: Started as a side project in 2008 in their hometown of Ludvika, Sweden, by Robert Jansson (vocals & guitar), Peter Larsson (drums) and Johan Hjelm (bass), who wanted to play a broader pop music. The project soon began to grew more serious than they had actually intended. More members were contacted to broaden the soundscape further - and to be able to take it to the stage - including Thomas Liljekvist (guitar). A demo was recorded. It became very popular at home, which forced them to quickly record and release the album "Send in Clowns" on their own. In 2012, Erik Arnberg (keyboards) jumped on the train that took them to their first real debut album "Blockbuster" (2014), which showed a remarkable change musically to a harder punk-influenced power pop, which later completely blossomed in the sequel "Noir" (2016).  The Sigourney Weavers are: Robert Jansson - Vocals & Guitar Thomas Liljekvist - Guitar Erik Arnberg - Keyboards Johan Hjelm - Bass Peter Larsson - Drums