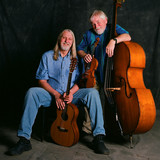 Taking their name from the novel by Richard Brautigan, Trout Fishing in America formed in 1979 from the remnants of the Houston-based unit St. Elmo's Fire. An acoustic folk-rock duo comprised of vocalist/guitarist Ezra Idlet and vocalist/bassist Keith Grimwood, they earned their greatest success performing music for children, beginning with 1991's Big Trouble. In addition to their kid-friendly songwriting, the band also delighted children with their rather arresting physical appearance, which saw Idlet standing at a whopping 6'9" tall. Grimwood, meanwhile, remained roughly 14 inches shorter than his bandmate. 1992's Over the Limit signalled a brief change in direction, targeting adult audiences rather than youth, but 1994's Mine! won a Parents' Choice Award. After 1996's Reel Life, Trout Fishing in America returned the following year with the children's record My World. Another release for adults, Closer to the Truth followed in 1999. It was only a brief reprieve from family-oriented material, though, and the duo returned in 2001 with Infinity, followed by It's a Puzzle two years later. Trout Fishing in America's 12th release arrived in 2004, a holiday album titled Merry Fishes to All that earned the duo their second Grammy nomination. My Best Day arrived in 2006, featuring live renditions of old and new songs; it, too, earned the band a Grammy nomination, and Trout Fishing in America returned in 2008 with a homemade album entitled Big Round World. ~ Jason Ankeny, Rovi