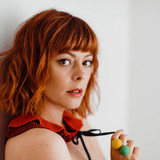 Australian singer/songwriter Lenka has enjoyed a varied international music career, since her days with acclaimed Aussie band Decoder Ring, to five solo albums released over the last decade through Epic Records and her own label Skipalong Records. Known for her whimsical optimism, many of Lenka’s songs have been featured in film and TV and she has toured in many continents. 2020 sees the release of two EPs from Lenka, one of covers and one of new originals.