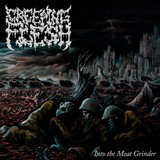 Established in Swedish Death Metal haven Gothenburg in 2013, Creeping Flesh started on a mission to play old school death metal in the style of bands such as Bolt Thrower, Asphyx and Obituary, mixed with Swedish melody and sound. One year later, their first release, the EP Unravelled by War (2014) firmly established the sound of the band. The release was soon to be followed by two more EPs; and the debut album “Into the Meat Grinder” in 2019. Formed by William Persson Öberg, Sofus Stille, Martin Kadhammar (also in Strykjärn), Robert Karlsson (ex Misfire), and Conny Nyberg, the band did several successful live shows, including a debut gig at Gothenburg Deathfest in 2015, and a tour of England in 2017. Following the departure of bass player Conny Nyberg, friend of the band Korp Thidrandir joined to complete the lineup, and saw the band play bigger stages with festival shows at both House of Metal and Gefle Metal Festival in Sweden in 2019.