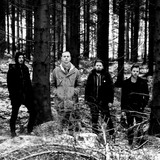 In the summer of 2012 in Sweden, a group of individuals came together with a solitary goal in mind, to create dark music offset with the smallest glimmer of hope. Instead of being inspired by political religious themes, the band turned to their own personal and internal wastelands to see what would manifest from their subconscious; writing within this very cruel world. They embarked on their first journey to the world in 2014 with their debut digital EP "Yearwalker". The EP was well-received, and to celebrate the fact, the album was re-released on a LP format in the following year by two labels; Catatonic State from Sweden and Art of Propaganda from Germany. After several live debuts following the release, the songwriting for the debut full-length took place. The album "Grimen" was announced with its first single "Cringe" in late 2016, with a stronger than ever production, mastered by Magnus Lindberg of Cult Of Luna. "Don’t you love it/hate it when a band comes along, seemingly out of nowhere, with a debut album so good you struggle to grasp how they’ve actually managed it?" (No Clean Singing), "it's a breathtaking achievement for a band that's just getting started" (The Sludgelord) — the highly regarded full-length album "Grimen" was released in the following year. Now in 2018 after further live appearances and compositions, Gloson is ready to take a new step into the world.