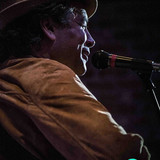 Ted Hefko and The Thousandaires stir up an intoxicating brew of the profound and the profane, of virtue and vice and most importantly the volatile in-between. Ted’s songs explore hope and hustlers, saints and strays, drifters and the down-and-out. &nbsp; Born in Madison, WI, Ted began writing lyrics in the second grade and picked up the guitar and sax a couple years later. At 18, fresh out of high school, he caught a Greyhound bus to the Big Easy to follow his dreams.&nbsp; Ted toured nationally with jazz-jam band, idletime, opening for acts like The Funky Meters, Leftover Salmon, Derek Trucks, Rebirth Brass Band, and North Mississippi Allstars. &nbsp; In 2003, Ted moved to New York to be a horn player for hire and hone his jazz chops. It quickly became apparent that his biggest asset was his experience in New Orleans. He started leading his own groups performing sets of southern Louisiana standards mixed with modern jazz tunes and pulled in early influences like the Piedmont blues, country and folk songs that he loved as a kid. Hefko released his first all-original album in 2009, Egyptland, a collection of scenes and stories set in New Orleans. This was followed by the jazzier and more playful, If I Walked On Water.&nbsp; A few years later, he and his live band stopped in the Crescent City to record Distillations of The Blues. That stop rekindled his love for New Orleans which would eventually lead to him to settling down there again, where he would write and record Gas Station Guru.