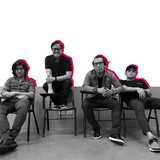 Anyô \ˈan-yo\ is a Filipino noun meaning figure, form, or appearance. Formed in 2005, this power-lineup of musicians is composed of Kettle Mata on guitar and vocals, Matt Conanan on guitar, Janby Teodoro on bass, and Marvin Tad-y on drums. Anyô’s music defies precise categorization. Their music can be best described as alt-rock with hints of power pop, taking influence from such bands and artists like Vertical Horizon, Dishwalla, Coldplay, Switchfoot, The Police, and U2.