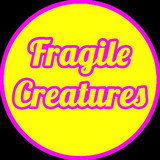 Fragile Creatures released their second album, Punk Yacht, in August 2020. The title is a playful nod to their genre-defying approach to rock. Formed in Brighton in 2012, their debut album And Other Wild Things was released in Spring 2016, after narrowly escaping development hell. Following this they decided to adopt a fully independent approach, learning how to record themselves while lead-singer Adam Kidd took an MA in the music industry at WaterBear college. In May 2019 they self-released Heart Beat EP to test the water and build anticipation for the Punk Yacht record. Latest single, Distant Star, has been described as a mix between Joy Division and 80s top 40 pop, with a lyric about the emotional orbit of ex-lovers. Previous Punk Yacht singles include Give Me The Rhythm, featuring a lead vocal from keyboard player Aaron Neville (aka. NevilleSounds), written about magical moments of connection between performer and audience; Parallel Lines – a mellow ballad contemplating patience and transformation; Big Red Button – an explosive live favourite trying to find fun in self-destruction; Phantom Limb – a dark and moody slow burner, using a lost limb as a metaphor for lost love, and A New Low which boldly fused indie pop with DIY rock, whilst critiquing clickbait media and populist politics. Punk Yacht showcased the lo-fi sound and rampant eclecticism of the mighty Fragile Creatures, who are already hard at work crafting a new album for 2021 in spite of the chaos in the world.