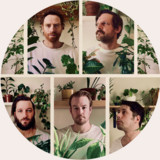 Royal Canoe would never be characterized as having taken the simple, prescribed path over the past decade. This almost stubborn fascination with finding “the long way around” has resulted in a rich catalog of albums, EPs, videos and experimental live-shows. Whether it’s releasing radio-singles in 5/4 time, performing concerts on instruments made of ice, adamantly dragging their multiple-drum-set, six-keyboard, live-setup around the world in their van and trailer, or their various outrageous schemes to stay connected to their fans, Royal Canoe have stuck around because they’ve never lost sight of what drives them - the exhilaration that comes with the opportunity to do something completely new. Royal Canoe’s musical journey has taken them around the world and into projects they never dreamed of. They’ve played over 500 shows from Kiev to California, toured with Alt-J and Bombay Bicycle Club and hit major festivals like Bonaroo, Iceland Airwaves and Osheaga. They’ve written and performed a musical version of Shakespeare’s Richard II, performed their sophomore album backed by the Winnipeg Symphony Orchestra and built a concert from Beck’s sheet-music only album Song Reader at Winnipeg’s prestigious New Music Festival. Most recently, Royal Canoe performed an outdoor winter concert to more than 5000 attendees featuring re-imagined versions of their songs using only instruments made of ice harvested from local rivers and ponds.