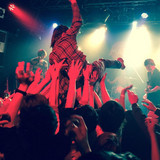 Manchester, England's Nine Black Alps feature Sam Forrest (vocals/guitar), James Galley (drums/vocals), Martin Cohen (bass), and David Jones (guitar). The indie rock foursome came together in 2003, taking their name from a line in the Sylvia Plath poem "The Couriers." Two years later, Nine Black Alps inked a record deal with Island in the U.K. Their debut album, Everything Is, arrived that June. A U.S. record deal with Interscope and a self-titled EP followed in July. Tours with the Kaiser Chiefs and Weezer as well as festival appearances at Glastonbury, T in the Park, Reading, and Leeds coincided with the success of such Top 40 singles as "Shot Down," "Not Everyone," "Unsatisfied," and "Just Friends." Produced by Rob Schnapf (Beck, Elliott Smith, the Vines), Everything Is was released stateside in February 2006, and a limited six-song EP, Glitter Gulch EP, came out shortly after. West Coast dates with Social Distortion followed that summer, while their second album, Love/Hate, was released in October 2007. When their major-label deal ended, the band released a third record, Locked Out From The Inside, through its own Lost House Records in October 2009. Next came a deal with Leeds-based Brew Records, which released their fourth album, Sirens, in October 2012 after Martin Cohen left the band and was replaced by Karl Astbury. With Brew closing the following year, Nine Black Alps signed on with Hatch Records, where they released their fifth album, Candy For The Clowns, in 2014.