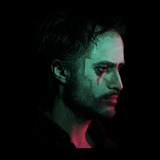 After hanging up his gloves from a career in finance and as co-owner of The Society Club in London, Brudini´s music speaks of a life spent journeying and of a man who has traversed seemingly contradictory worlds before finding his creative voice. Coined by Louder Than War as “an indescribable talent”, Brudini has drawn praise from NYC punk legend Danny Fields (Iggy Pop, Jim Morrison, The Ramones) and received UK airplay on BBC6, RadioX, Radio 2’s Frank Skinner. Live performances include collaborations with Lulu Gainsbourg, appearances at Tate Britain and a sold-out Soho alt-cabaret with LGBTQ-pioneer Lanah P and Erasure´s Andy Bell. A sworn user of analogue gear for his recordings, Brudini evokes a wealth of artists and mediums, tracing anything from chanson moderne, jazz and classical to experimental postpunk, krautrock and world music. His long term musical collaborators include Casper Hoedemaekers (double bass) and jazz drummers Livio Polisano and Derin Bayhan. He comes off like a new-age lounge crooner in a smoky existential dream parlour, wielding an intense, eclectic live show that’s psychedelic to the point of being a total sensory experience. Brudini can always be found in that cosmic last chance saloon, uniting wayfarers and music lovers across the void through his cinematic plainsong. 5 years in the making, his debut LP From Darkness, Light was released October 9th, 2020 on Apollon Records.