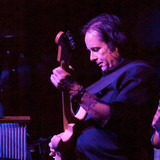 Guitarist and composer Bill Hart earned his stellar reputation as a guitarist, composer, bandleader, music educator, touring musician and recording artist. Having released six CDs as leader of his world-renowned Bill Hart Band. Bill Hart was born in Toronto, Canada on January 13th, 1964 and when he was 13, Bill moved with his family to Jacksonville, Florida where he began his music studies at Jacksonville University. Moving to Los Angeles, Bill continued his education at the famous Guitar Institute of Technology (GIT), where he expanded and built upon his musical knowledge and guitar skills, all the while becoming immersed in a variety of music styles and genres such as rock, pop, funk as well as Latin, Cuban, Fusion and a range of jazz styles. In the late 1980s Bill began his career as a guitar instructor at the prestigious Atlanta Institute of Music (AIM) in Georgia and worked his way up to head the institute’s guitar department, where he taught guitar for over 25 years. Following five critically acclaimed instrumental jazz-fusion albums, on his 6th and current 2018 Blujazz Productions CD, Live at Red Clay Theatre, Bill Hart’s guitar-based instrumental sound proves authentic and compelling in a live concert setting. Recorded in June 2017 at the Atlanta concert venue, and released at the end of 2017, Live at Red Clay Theatre spotlights Bill’s current six-piece band. Bill also released a live concert DVD in 2005, called Think About It. Written by Robert S Silverstein