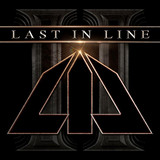 An American heavy metal band formed out of the remaining original lineup of Dio, Last in Line were founded in 2012 following the death of Ronnie James Dio in 2010. Hewing closely to the dramatic, sonically heavy, yet always melodic power metal/hard rock style of their namesake, the band issued their debut album, Heavy Crown, in 2016. Featuring drummer Vinny Appice, bassist Jimmy Bain, guitarist Vivian Campbell, keyboardist Claude Schnell, and vocalist Andrew Freeman, Last in Line were originally devised as a Dio covers/tribute band that would focus on material from the group's first three albums, Holy Diver, The Last in Line, and Sacred Heart. In 2014, after playing a series of well-received shows, the bandmembers announced that they would be heading into the studio to begin work on their debut LP, which would be produced by ex-Dio bassist Jeff Pilson and feature all-original material. In January 2016, after completing recording, the band joined Def Leppard's Hysteria on the High Seas cruise to help promote the album, but bass player Bain, who had been struggling with pneumonia throughout the voyage, passed away in his sleep from complications due to lung cancer, putting the future of the band in jeopardy. The band ultimately soldiered on, and the much-anticipated Heavy Crown was released via Frontiers Records in February 2016 to enthusiastic reviews. The band conscripted seasoned bass player Phil Soussan (Beggars & Thieves, Ozzy Osbourne, Vince Neil Band) for the recording of their sophomore effort, the aptly named II, which was released in February 2019, again via Frontiers. ~ James Christopher Monger, Rovi