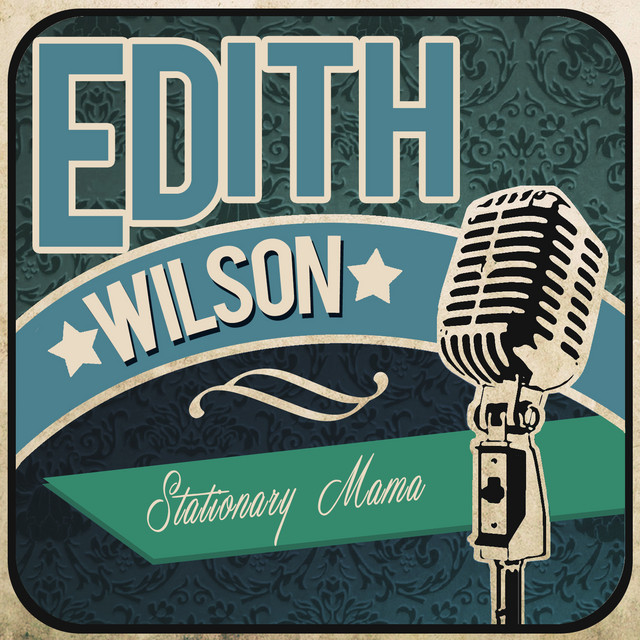 Edith Wilson belongs to that first group of African-American women referred to as vaudeville or cabaret blues singers that in the early '20s followed Mamie Smith into the recording studios. Wilson's recording career started with Columbia in 1921 with accompaniments provided by trumpeter Johnny Dunn's Jazz Hounds. She was born Edith Goodall to a middle class black family in Louisville, KY, on September 2, 1896. Her birthdate is often stated as ten years later, but this was due to vanity. Her ancestors included an American Vice President, John C. Breckenridge, and a woman who was the model for the Liza character in Harriet Beecher Stowe's novel Uncle Tom's Cabin. Edith Wilson entered show business in 1919 at the Park Theater in Louisville. Shortly afterwards she joined blues singer Lena Wilson and her pianist brother Danny when they performed in Louisville. Edith and Danny Wilson were married and the three formed an act. They opened in Baltimore to success and played locations on the East Coast. When they encountered talent scout Perry Bradford in New York, who had brought Mamie Smith to Okeh Records, Edith Wilson was introduced to Columbia Records where she was paired with Johnny Dunn's Jazz Hounds for a series of 17 recordings made in 1921 and 1922. Edith Wilson would make few recordings in subsequent years until she made her comeback in the 1970s. While working at the Club Alabam in New York in 1924, Edith Wilson was caught up in a dispute between the Fletcher Henderson Orchestra and the club managers. They wanted tenor saxophonist Coleman Hawkins to appear on-stage with Edith Wilson. Hawkins was perfectly willing to oblige but asked for extra compensation, which was refused. Edith Wilson once recalled, "I was to come out on-stage carrying Hawk's saxophone and sing a song called "Nobody's Used It Since You've Been Gone" and then I'd give him back his horn and he'd play." It's not certain if this incident led to the Henderson band's departure from the Club Alabam right away, but soon the orchestra was hired by the Roseland Ballroom. Edith Wilson never really was a blues singer in the sense of Bessie Smith or Ma Rainey. Her career would be spent performing on theater stages and in nightclubs. She became a major star in the New York black entertainment world. She was a member, with the famous Florence Mills, of "Lew Leslie's Plantation Review" at the Lafayette Theater in Harlem. In the mid- to late '20s, Edith Wilson was in England where she would establish herself as an international star. She would return to England many times over the course of following decades. Later, in New York, Edith Wilson appeared in the famous revue Hot Chocolates, where she introduced the Fats Waller/Andy Razaf tune "What Did I Do to Be So Black and Blue." Louis Armstrong also appeared on the show with Fats Waller and Wilson; the three were billed as "The Thousand Pounds of Harmony." Edith Wilson would appear with all the greatest names in black show business of the day, including Bill Robinson, Duke Ellington, Alberta Hunter, Cab Calloway, Noble Sissle, and many others. Edith Wilson was also a recognized actress, appearing in non-singing roles on radio shows like Amos and Andy and in the Humphrey Bogart/Lauren Bacall classic film To Have and Have Not. She was also active in early network television. Around 1950, Edith Wilson assumed the character of Aunt Jemima, promoting the pancake mix for the Quaker Oats Company. Some criticized Wilson for playing a black stereotype, but she refused to be intimidated and was proud of what she considered the aura of dignity she brought to the character. Edith Wilson retired from show business in 1963 to work as an executive secretary with Negro Actors Guild and to involve herself with other charitable, religious, and literary activities. She returned from retirement in 1973, performing and recording with various artists such as Eubie Blake, Little Brother Montgomery, and Terry Waldo's Gutbucket Syncopators. Edith Wilson's last appearance was at the Newport Jazz Festival in 1980. ~ Frank Powers, Rovi