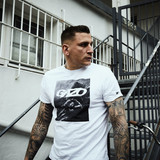 German rapper Gzuz emerged in 2009 as a member of Hamburg-based hip-hop crew 187 Strassenbande. The group is heavily influenced by hardcore gangster rap and the 187 in its name is a reference to the American police code for murder. Their self-titled debut arrived in 2009, followed in 2011 by the Sampler 2 album, after which Gzuz served three years in prison for predatory theft. Upon his release in 2013, he and fellow 187 Strassenbande member Bonez MC recorded the collaborative album High & Hungrig, which became a Top Ten hit in Germany upon its 2014 release. Channeling their momentum back into the group, they quickly issued 187 Strassenbande's Sampler 3 in 2015, this time reaching number two on the charts. That same year, Gzuz made his solo debut with Ebbe & Flut, again reaching number two on the German charts. Finally, in 2016, he and Bonez reached the coveted number one slot with their follow-up album as a duo, High & Hungrig 2. All the while, Gzuz continued to collaborate with other artists from his crew and the German rap scene. ~ Timothy Monger, Rovi