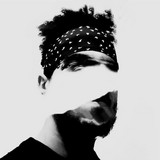 In 2011, Moroccan-based artist Sįmõ (Mohamed Oumoussa) set aside genre expectations and began producing music from a sole source of inspiration: the heart. Though Sįmõ had already been releasing music since then, it wasn't until the inception of “Eye Surface” in 2015 that the buzz behind his music began. A jack of many trades, Sįmõ is at once a producer, artist, and experimental graphic designer; he celebrates each of his passions by spending months exploring various avenues of self-expression. Through the graphic identity he has assumed, he projects into the world songs like “Indoors,” “Station 4 — 16,” “The Future is Winning,” and more. Known for his stretched-glitch frequencies, Sįmõ aims to lead you into what he’s coined “an infinite-dimensional space of decibels.” It’s an experience that brings to mind both the distorted sounds of futuristic harmonies as well as those never-before-visited parallel ambiances. An innovative method deriving from the musical disorder. Eye Surface: one of this year’s most promising acts and one to keep an eye on. ⚭