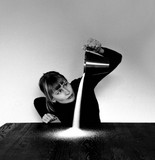 With her music and writing, singer/songwriter and author Jenny Hval brings a questioning, passionate, and frequently witty perspective to art, feminism, and sexuality. In much the same way that she contrasts her delicate vocals and provocative statements, her mercurial combinations of folk, jazz, spoken word, and electronic music are equally unconventional and approachable. Hval's early albums, such as 2012's Innocence Is Kinky, paired dreamlike sensuality with a resolutely independent viewpoint. As her music grew more conceptually dense, she broadened its sound. On 2015's Apocalypse, Girl, she surrounded her complex meditations with floaty, wide-open interpretations of dance-pop, while 2017's Blood Bitch touched on synth pop, metal, and horror soundtracks and 2019's The Practice of Love reinterpreted the euphoric sounds of '90s trance. Hval is also an avid collaborator, and 2012's Nude on Sand with Håvard Volden and 2014's Meshes of Voice with Susanna Wallumrød are just as vital to her body of work as her solo albums.

Growing up in Oslo, Norway, Hval was inspired by Kate Bush, Jimmy Somerville, and the ambitious, androgynous feel of '80s pop, and began playing keyboard. During her teens, she was also a member of the goth band Shellyz Raven; after moving to Australia to study creative writing at the University of Melbourne, she played with the groups iPanic and Folding for Air, and recorded her own material on a three-track recorder. She returned to Norway and released her 2006 debut EP, Cigars, which was nominated in the Best Newcomer category for that year's Spellemannprisen awards. She began recording as Rockettothesky that year, issuing To Sing You Apple Trees on Trust Me Records; two years later, the second Rockettothesky album, Medea, arrived. In 2009, she published the novel Perlebryggeriet (The Pearl Brewery). With her aptly raw and dreamy 2011 Rune Grammofon debut Viscera, Hval began releasing her music under her own name. The following year, her largely acoustic collaboration with Håvard Volden, Nude on Sand, released its self-titled debut album. In 2014, she teamed with Susanna Wallumrød on Meshes of Voice, which appeared on Wallumrød's SusannaSonata label. For her next solo album, Hval took inspiration from late-'60s Norwegian jazz singers, Todd Haynes' film Safe, and her upbringing in Norway's Bible Belt. The results, Apocalypse, Girl, arrived in 2015 on Sacred Bones. Jazz also played a major part in her next project, 2016's In the End His Voice Will Be the Sound of Paper. An experimental piece with the Trondheim Jazz Orchestra and Kim Myhr, it was sparked by a discussion of Bob Dylan's voice. Hval returned with her fourth album under her own name in October 2016. Co-produced by Lasse Marhaug, Blood Bitch was inspired by exploitation and horror films of the '70s, Hval's experiences touring her previous release, and the goth and metal scenes of her homeland. The following year, she lent her vocals to pieces by Kelly Lee Owens and Lindstrøm, and worked with Carmen Villain on her album Infinite Avenue. In March 2018, she debuted the project Lost Girls, another collaboration with Volden that emphasized the most improvisatory aspects of their work on the album Feeling. That May, she returned with The Long Sleep, an EP of jazz-influenced tracks featuring Volden, Marhaug, and players including percussionist Kyrre Laastad, pianist Anja Lauvdal, and trumpeter Eivind Lønning. That year, she issued the novel Å hate Gud ("Girls Against God"), while Perlebryggeriet was published in English as Paradise Rot. In September 2019, Sacred Bones released The Practice of Love, which found Hval combining the sound of '90s trance music with searching songwriting about love, creativity, and existence. The English translation of Å hate Gud was expected in 2020. ~ Heather Phares, Rovi