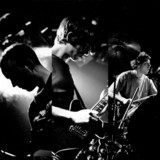 Southpacific are back, nearly two decades after their sudden exit from the 1990s Canadian music scene. Formed in Ottawa in 1997, Southpacific—Joachim Toelke on lead guitar, Phil Stewart-Bowes on bass and Graeme Fleming on drums, guitar and vocals—crafted a drone-guitar-driven, largely instrumental live sound inspired by Joachim’s initial idea to create “unmapped music”. They faithfully captured their live sound to tape with their debut self-recorded EP, 33, released on CD in August 1998. After relocating to Toronto, Southpacific signed to New York-based Turnbuckle Records, then home to Bailterspace and Oneida, in 1999. Their new label re-released 33 to much acclaim, and the EP made it into the top 100 on the CMJ chart. Southpacific followed up with their only full-length studio album, Constance, in 2000, before embarking on a short cross-Canada tour. They played their final show on August 26, 2000, to a sold-out Lee’s Palace in Toronto. The three members parted mutually, but the seed was always planted for an eventual return. Toelke, Stewart-Bowes and Fleming came back together to experiment again as Southpacific in 2019. The trio released the single "Depths" to kick off a series of new efforts in 2020.