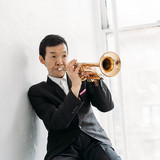 He then joined one of his most influential mentor, master arranger/composer, Gil Evans. Recording on several of Gil’s releases. Two Grammy award-winning recordings at this time were Live at Sweet Basil with Gil Evans and Machito and His Salsa Big Band. Returning to Japan with the SuperSounds, a group that included jazz innovators, Herbie Hancock, Wayne Shorter and Larry Coryell broadened his sound. Significant joint projects with the Howard University Jazz Ensemble at the Kennedy Center (DC) uniting cultures, have been particularly meaningful to Shunzo.. His film projects include the award-winning Children’s Rights Organization, TreShawn and the major-motion picture, Firefly in Japan. “Clearly Shunzo Ohno is no ordinary man. A spectacular trumpeter and an even greater musician. His music is enchanting, poignant, with legendary qualities of character, bravery and the spirit of the samurai…” JAZZDAGAMA Raul DeGama