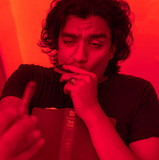 Ronil, being an early 90s kid from India, belongs to the era when foreign music stationed its roots on TV. Like many music enthusiasts, his soul was ruled by Hard rock music.. and later he impelled to persuade music as a career. Being a Slash Stan, he decided to learn guitar at a very young age.   As his crusade advanced, At the age of just 16, he opened for a well-known metal band called 'Bhayanak Maut'. Also, he established himself as the CEO of a production house for a significant period. In this journey of 12 years, his finesse as a bass player, rhythm guitarist is few claps worthy. In this course of time, he travelled across India and rejuvenated each audience with his music. He scribbles a lot, now he has started to make it into songs.   This Debut single, "Show's Over" is from his personal pages.