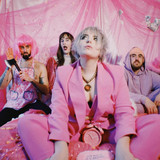 Adventurous beats and lairy, garage punk-infiltrated guitars; vocals that veer from searing emotional drama to camp self-parody; frenetic experimentation with pristine pop hooks – it may be impossible to pin a genre on LibraLibra, but it’s not hard to pinpoint the feeling that permeates their shows. The feeling that, whatever you’re feeling, it’s ok. It’s enough. You’re enough. You are ok. LibraLibra’s emphatic sound and liberating ethos have inspired an ardent community of fans, as well as pricking up ears in high places: invited into the studio by Idles producer SPACE to develop the their debut EP (launching early 2020), they were also recruited by the iconic Psychic TV to open for them at a sold-out Heaven in London. Other rapturously-received sets include the Victorious festival main stage, Liverpool Sound City, and support for Flamingods and fellow DIY hellraisers ILL and Sœur. Having honed her skills on major stages as part of Simon Raymonde’s Lost Horizons, among other projects, magnetic frontwoman and breathtaking vocalist Beth Cannon leads LibraLibra from spiky, garage punk-laced alternative pop bangers through to guttural, kohl-smudged new romantic balladry. Fizzing with character and colour, LibraLibra’s videos and immersive DIY events put the cherry on an all-encompassing AV world in which serious and sincere sentiment packs all the more impact via a dose of humour and an unashamed trash-pop sensibility.