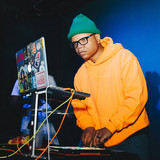 ILLingsworth is a dude created by another dude. he's also an emcee, a music producer, and creator of strange videos. he was born, raised, and schooled in Detroit, MI. currently he still lives there so, he must like it. since youth, ILLingsworth has always loved creating and entertaining. inspired by his older brother's foray into hip hop, he too embarked upon the path. at some point along his timeline, he helped co-found a couple of rap groups, one being Detroit CYDI (with Rufio Jones &amp; Sean Uppercut). he's collaborated with Sene, KOOL A.D. (formerly of Das Racist), Open Mike Eagle, Milo, Nameless, Hir-O, Stryfe, SelfSays, Fresh Daily, Zach Sherwin, and more. he's done many shows inside and outside of Michigan, even outside of the good ol' USA (you can count them on one hand at this point). ILLingsworth is also incredibly smooth, mostly due to alopecia universalis. none of that is really important, though. just listen to his music and share it if you like it.