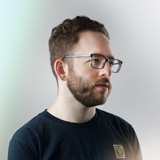 Direct (Joseph Lyncheski) is an American electronic musician affiliated with Monstercat. Direct sets himself apart from his peers by combining tight production and deep atmospheres with pop-inspired vocals and piano. He is influenced by a wide range of sources—from his label mates to the likes of Burial, Radiohead, and early dubstep.   Growing up in a very musically positive household, Joseph was encouraged to experiment with electronics and music at a very young age. As a child, he spent most of his time either at the computer or listening to his parents’ record collection. It is no surprise he would eventually combine the two. By the time high school came around, he was actively interested in pursuing music and continued his interest into college majoring in Recording Arts. Just prior to his 18th birthday, Direct released his first single with Monstercat.   With his landmark EP Trust in Me, Direct showcased his musical diversity and found his place in electronic music. In October 2019 he followed up with the Cold Ground EP released on Monstercat. He is currently working on other projects as well as collaborating with friends and consistently releasing singles.