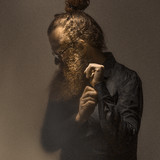 Ben Caplan is a songwriter, singer, and performer based in Halifax, Nova Scotia, Canada. Known for his energetic live shows, he has been touring around the world since 2011 and has played over 1600 concerts in 28 countries since that time. His last full length release, Old Stock, was both an album and a musical theatre production. Released and performed to great critical acclaim, the play toured around the world, including a seven week run Off Broadway where it was nominated for seven Drama Desk Awards. The play was awarded Nova Scotia’s top honour for artistic merit, the Lieutenant Governor of Nova Scotia Masterworks Arts Award. The most recent project from Ben Caplan is a dark re-imaging of the classic Christmas carol, O Holy Night. Caplan’s work frequently draws on Eastern European folk traditions and those influences are clearly heard in this dynamic recording. It’s a klezmer inflected minor-key rendition of a holiday classic. Working with a big crew of musicians, including string quartet, soloists, woodwinds, and pipe organ, Ben Caplan’s new recording is a radical departure from other recordings of this well known song. With all of his recent time off the road, Caplan has been taking the opportunity to work on new music and revisit old music. Alongside his time writing and playing live stream concerts, he's been working on stripped back acoustic versions of songs from his previous albums. That project, entitled Recollection, is slated for release in March of 2021.