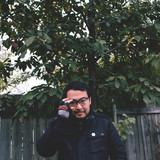 The prolific, Portland-based Randall Taylor is an audio/visual artist best known for his musical project, Amulets. Taylor’s work uses analog tape and its imperfections to explore themes like degradation and nostalgia and their relationship to technology and to the self. By constructing and modifying tape loops and repurposing antiquated cassette players, Taylor creates dense, never-ending, looping soundscapes for both his live performances and sculptural sound art installations. Taylor has performed across the country at numerous festivals and opened for such acts as This Will Destroy You, Efrim Manuel Manuck (of Godspeed You Black Emperor), Benoit Pioulard, and Steve Hauschildt to name a few. His solo exhibition work has been on display in Austin, TX at Dimension Gallery and most recently installed in Portland, OR at Variform Gallery. Taylor was also recently published in the latest Kim Bjorn book series “PEDAL CRUSH” as an artist and inspirational creator. His last full-length, Between Distant and Remote, was released on Beacon Sound Records in late 2019, which he toured along the west coast in support of.

Most recently, Amulets collaborated with Flenser family Midwife on the track "Heaven" for her new split cassette. Amulets brilliant new full length Blooming is a fitting debut for The Flenser — look for the album to be available on April 2nd, 2021.