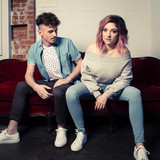 Music is their soap box, message is what drives them. Jenesia is quickly becoming one of the most emotion-evoking, story-telling pop groups in Canada. Their pop musicality is coloured by soulful blues guitar and a hint of jazz. Their passion goes far beyond making hit songs: Jenesia writes to encourage and inspire others towards justice. After surviving nearly a decade of childhood sexual abuse, Jenesia’s Alexander David aims to bring awareness to the growing epidemicJenesia has played over 400 live shows including two Western Canadian tours, an appearance on national television in Toronto and showcases in Nashville, TN. These award-winning songwriters have been finalists in the John Lennon Songwriting Contest, L.A. Top Voice and were nominated for a GMA and Edmonton Music Award. The group has received national airplay and their single, Mexico, had its world premiere on the Strombo Show, received over 90,000 streams on Spotify alone and made the 106.5 Mountain FM’s Top 60 songs for 2018. Their Mexico music video garnered 125,000+ video views online.