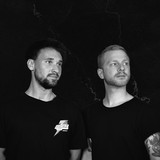 Sound & Temper is the music project by Andy and Simon from Germany. After several jam sessions they settled on the idea to give their idea a name: Sound & Temper was born. After charting on Beatport with "Lichtlos" they started to play several gigs, for example at the Horst in Vienna, Haus 33 in Nürnberg and the Ampere in Munich. 2019 started furious not only with a release on "ERROR Records", the German techno established by Klanglos. Their banger EP "Miasma" was released on well known label Eclipse Recordings and entered the Beatport hard techno charts on 5th place and the techno charts on 57th place. In the summer of 2019 they also reached the 3rd place in the Hard Techno Charts with their "fire" EP on Marika Rossa's label Fresh Cut. At last they releast "Nova" on the famous Label Reload Records from The YellowHeads and reached the 37th place in the Techno Charts. And with "Supercluster" on Error Records they reached the 5th place. Techno legend UMEK added their track "Deus" in his Beatport charts in October 2019.