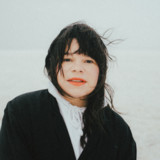 Samantha Crain is a Choctaw songwriter, musician, producer, and singer from Oklahoma, signed with Real Kind Records. Crain won 2 NAMMYs (Native American Music Awards) in 2009 for Folk Album of the Year and Songwriter of the Year and an Indigenous Music Award in 2019 for Rock Album of the Year. She has had songs featured on 90210, HBO's Hung, and in many independent documentaries and films, including The Dark Divide, Barking Water, and

UNRESERVED: The Work of Louie Gong. Her genre spanning discography has been critically acclaimed by media outlets such as Rolling Stone, SPIN, Paste, No Depression, NPR, PRI, The Guardian, NME, Uncut, and others. She has toured extensively over the past 13 years nationally and internationally, presenting ambitious orchestrated shows with a band and intimate folk leaning solo performances. She has toured with First Aid Kit, Neutral Milk Hotel, Lucy Rose, The Avett Brothers, The Mountain Goats, Brandi Carlile, Langhorne Slim and many other bands and artists.