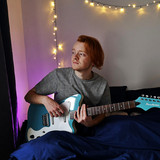 Following two years of incessant touring the UK and Europe with Casey Lowry, Charles Hibberd returned to his solo project HBBRD in early 2019 releasing his highly praised second single Too Close to Call. The single was swiftly followed with a UK headline tour, including sold out shows in both Chesterfield and London, building solidly on prior festival slots at YNOT and Tramlines. Chesterfield raised, currently London based HBBRD now has a debut EP in his repertoire, having released the short concept project I Kinda Like Wait For It You in early 2020. The EP, self produced in a plethora of studios across London, has earned HBBRD support from War Child and Isle of White festival affiliated promoters Hot Vox, the BIMM Institute, and indie record label District Records. The latest single ‘Sugarcoat’ is a fitting follow up to HBBRD’s first self produced effort, marking a sidestep in tone for the Cestrefeldian, leaning into a more grungy guitar style, and more powerful lyrical messages.