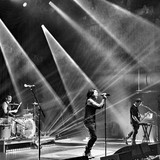 Part of the late-'90s mainstream industrial boom, American rock group Stabbing Westward wrapped their dour, angst-filled cries in appropriately dark and moody atmospherics, joining bands like Nine Inch Nails and Gravity Kills with a similarly corrosive style that would evolve over the course of four albums. Peaking with breakthrough sophomore LP, 1996's gold-certified Wither Blister Burn & Peel, they issued another gold album (1998's Darkest Days) before closing out their first era with the stylistic shift of 2001's fraught, pop-leaning Stabbing Westward. Disbanding in 2002, the group members split and pursued individual projects, most notably the Dreaming. After a nearly two-decade absence from the studio, the band regrouped and issued the comeback Dead and Gone EP at the start of 2020. Stabbing Westward was formed in 1985 in Macomb, Illinois by vocalist Christopher Hall and keyboardist Walter Flakus, schoolmates and radio station colleagues at Western Illinois University. They moved east to Chicago in 1986 and recruited guitarist Jim Clanin to solidify the original lineup. The trio released an EP in the early '90s titled Iwo Jesus (which was officially reissued in 2020), and added guitarist Stuart Zechman, bassist Jim Sellers, and drummer Chris Vrenna (Nine Inch Nails, Die Warzau) for the recording of a series of demos that eventually caught the attention of Columbia Records. After signing with the label, Vrenna parted ways with the group and was replaced briefly by David Suycott. In late 1993, Columbia issued the band's major-label debut, Ungod. Although album sales were less than desirable, the group promoted it relentlessly, touring with the likes of Depeche Mode and Killing Joke and building a modest fan base. After more personnel changes -- Suycott was replaced by Andy Kubiszewski (Exotic Birds, The The) and Zechman left without a replacement -- the band returned to the studio to record their sophomore effort. Their early groundwork promoting Ungod paid off in 1996, when the group released their breakthrough second album, Wither Blister Burn & Peel. Buoyed by the success of singles "What Do I Have to Do?" and "Shame," the album reached gold status. As the songs climbed the Billboard rock charts -- both became Top 10 hits on the U.S. Mainstream Rock list -- the music videos also helped push the band's mainstream exposure. Following the success of Wither Blister Burn & Peel, Stabbing Westward spent most of 1997 in seclusion, working on their third album in their new home base of Los Angeles. That record, entitled Darkest Days, was released in April 1998. Debuting at number 52 on the Billboard 200, it became their second gold-certified release and yielded the hit single "Save Yourself." Despite the chart success, Columbia dropped the band in the spring of 2000. A year later, the band inked a deal with Koch Records and issued a self-titled release. Stabbing Westward featured a distinct stylistic shift that included acoustic guitars and a polished pop sound that presented a fresh way for the band to deliver their pained and anguished messages. Single "So Far Away" was a modest hit on the Billboard rock charts, while the album peaked at number two on the Indie Album chart and became their highest-charting to date on the Billboard 200. Plans for a fifth studio effort were in the works in late 2001, but momentum was abruptly halted when Stabbing Westward disbanded in February the next year. In the years that followed, bandmembers pursued their personal projects, with Hall most notably forming the Dreaming. Flakus worked as a radio personality before reuniting with Hall in the Dreaming in 2015. Kubiszewski worked as a producer and songwriter for other artists and also began composing music for television shows. In the early 2010s, the band teased reunions at the Dreaming concerts, but did not officially reunite until 2016 at the Cold Waves Festival in Chicago. In addition to former members Hall, Flakus, Mark Eliopulos, and Johnny Haro, the new lineup also featured Carlton Bost (the Dreaming, Orgy). Another Orgy alum, Bobby Amaro, joined the fray in 2018, replacing Haro for a 2018 tour celebrating Darkest Days' 20th anniversary. With nostalgic fan interest at a peak, the band announced its official return in 2019. The quartet -- Hall, Flakus, Bost, and Amaro -- entered the studio to record Stabbing Westward's first output in nearly two decades. The resulting EP, Dead and Gone, arrived at the start of 2020. ~ Neil Z. Yeung & John Bush, Rovi